Summary of Laparoscopic Fenestration for Symptomatic Lymphocele After Kidney Transplantation

[INTRODUCTION] Symptomatic lymphocele is one of the most frequent complications after kidney transplantation and belongs to the family of perirenal fluid collections such as hematoma and urinoma. Its origin is lymphatic leakage caused by either disrupting lymphatic channels of iliac vessels or the graft itself. Some authors reported significant associations of lymphocele formation with diabetes, new immunosuppressive agents (tacrolimus, mycophenolate mofetil (MMF)), and acute rejection episode. Treatment of this complication should be need, because it is thought to cause graft dysfunction, infection, deep vein thrombosis, abdominal pain or leg edema. The effective treatment of this complication is a surgical drainage of the cavity, which traditionally, is widely opening the wall connecting the lymphocele cavity to the intraperitoneal space. So, laparoscopic approach would be useful of its minimal invasiveness. We had 15 cases of post-transplant lymphocele patients with clinical symptoms. In this presentation, we report the procedure of laparoscopic fenestration and the summary of 15 cases of successfully released from the complication.

[METHOD AND PROCEDURES] Three hundred and sixty-six patients with renal failure were performed kidney transplantation at our institution between April 2004 and August 2013. Fifteen patients had symptomatic post-transplant lymphocele and underwent laparoscopic fenestration. With this operation, the patient was placed in the supine position. Placements of three working ports were as follows (scope port (5mm); under umbilicus, 12mm port; right upper lateral abdomen, 5mm port; left lower lateral abdomen). We firstly confirmed the location of the cavity with laparoscopic ultrasonography and decided the place of fenestration. We made an enough window from the lymphocele cavity to intraperitoneal space. 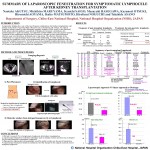