Introduction
Recent studies have revealed increased reports of internal injuries due to unintentional ingestions of grill-cleaning wire bristles. The paucity of reports earlier to 2012 stands in contrast to reports of cases surfacing after this date, suggesting an increase in exposure to a common risk factor. We present a case of wire bristle induced gastric perforation, along with its successful laparoscopic management.

Case report
A 25-yr old female presented to the emergency room with a three-day history of progressively worsening epigastric pain and nausea, subsequent to eating chicken cooked on a grill. Physical examination revealed rebound tenderness compatible with an acute abdomen. A CT scan showed a 3cm linear radiopaque structure going through the gastric wall. (Figure 1). The patient was emergently taken to the operating room for diagnostic laparoscopy. A foreign object was identified extending from the gastric wall with abundant fibro-purulent exudate. (Figure 2) After successful removal of a linear metallic object (Figure 3), the gastrotomy was repaired using an endostich device with a modified omental patch technique as has been previously described. All exudate was aspirated and the peritoneal cavity was irrigated with 3L warm saline solution with bacitracin. Cultures were sent. (Figure 4) Intraoperative endoscopy revealed no air leak. A #10 flat JP drain was placed.

The patient had an uncomplicated post-operative course. Her peritoneal fluid cultures were positive for proteus mirabilis and She was treated with intravenous pipperacillin-tazobactam every 6 hours. She had rapid resumption of po intake and passed flatus on day 2, JP drain was removed and she was discharged home on post-operative day 3.

The majority of cases have entailed the wire bristles lodging in lingual and cervical tissue. There have been three cases of esophageal involvement, two of which were perforations requiring open operative intervention. Three cases of small bowel perforation have been reported, which were laparoscopically managed. There has been one case reported of gastric perforation leading to a hepatic abscess, treated with laparotomy.

The common factor reported in all cases is consumption of food products cooked on a grill previously cleaned with commercially available wire bristle grill-cleaning brushes.

To the best of our knowledge, this is only the second report in the literature to report gastric perforation by a wire bristle, and the first report on its successful laparoscopic treatment.

Therefore we submit it is possible to manage wire bristle gastrointestinal perforation laparoscopically, with the use of an endostich and omental patch technique to close the defect in the gastric or intestinal wall, as has been previously described for perforated peptic ulcers as well as perforated marginal ulcers. Intraoperative endoscopy should be used as an adjunct for verification of the integrity of the repair, as has been described in the bariatric surgery literature. 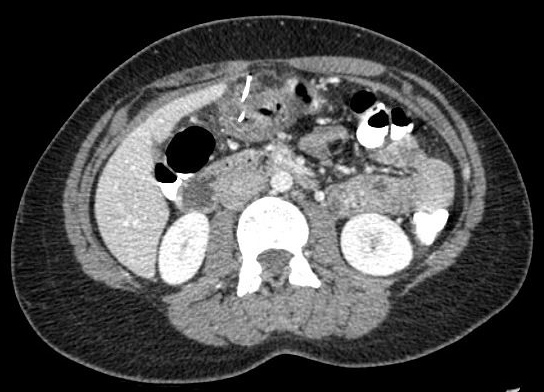 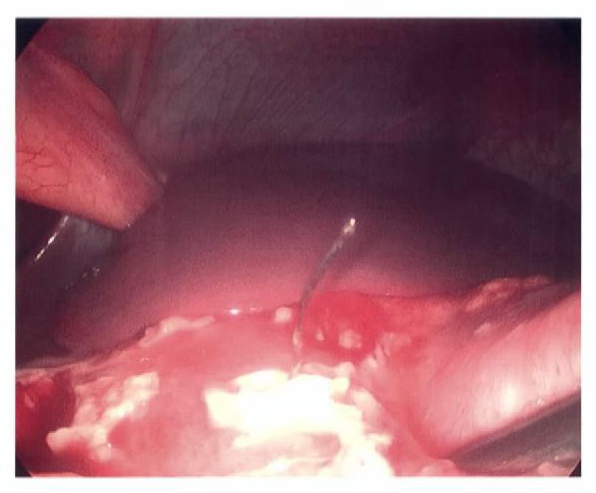 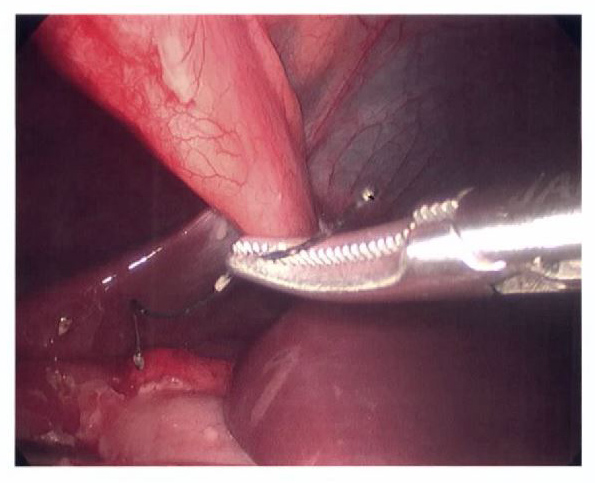 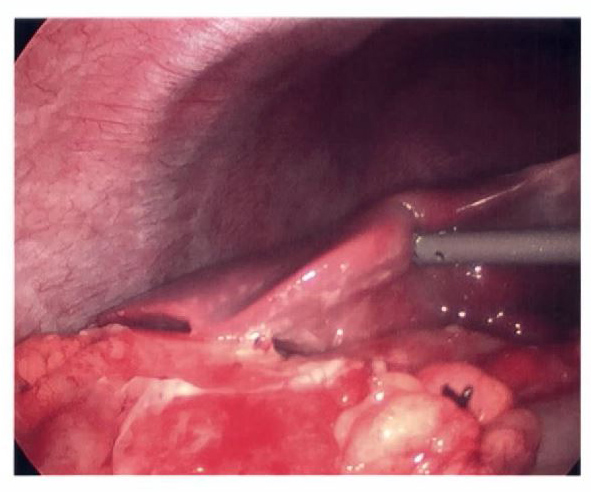