Bilateral axillo breast approach (BABA) for thyroidectomy utilized artificial subcutaneous emphysema to create a space for endoscopic surgery of thyroid. We utilized the similar idea to approach a subclavicular mass via the ports at subaxillary area.
Materials and methods:
A 23 year-old young lady visited our hospital for a palpable left subclavicular mass. Chest tomography revealed a well-defined mass lesion about 2.3×3.7×4.3 cm in size, located between pectoralis minor muscle, thoracic cage and adhesion to the subclavian vasculature. Traditional approach was not accepted because the clavicle should be fractured and the scar is not acceptable. We tried endoscopic approach via submuscular space, similar to that of BABA. We incised at lateral aspect of the chest wall. The cuffed trocar was inserted into the plane just beneath the pectoralis major muscle. Then CO2 was insufflated, and the pressure was set at the 15cm H2O. at the same time, blunt dissection was performed. The pectoral major muscle was lifted from the thoracic cage and we created an working space. After identifying the mass sitting on the subclavian vein, the tumor was carefully dissected and removed completely.
Results:
The patient’s postoperative recovery was uneventful and the drain tube was removed in the next day. Transient subcutaneous emphysema subsided in 2 days. The final diagnosis was Castleman’s disease.
Conclusions:
Subcutaneous or submuscular insufflating air to create a working space has been utilized in operations such as TEP and BABA. Now, we tried the similar idea at chest field. We can use the method for approaching other benign chest wall disease like benign tumor or even fixation of fractured rib. 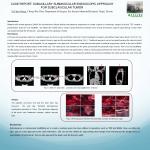