Introduction: Various techniques are used for retraction of the liver during laparoscopic surgery. We developed a novel U-shaped liver retractor and compared the usefulnesstility of our retractor with that of the Nathanson retractor in laparoscopic- assisted distal gastrectomy (LADG).

Methods: The retractor consists of double metal feathers (each 5-cm long and 1-cm wide each) covered with soft gauze. The double feather can opens in the abdominal cavity and to become U-shaped. In addition, the shaft has a small diameter (2.4 mm), resulting in a small scar on the abdominal wall. [Patients] From January 2014 to May 2015, 12 patients (7 males and 5 females) who underwent LADG with an U-shaped liver retractor (Group A) and 19 patients (11 males and 8 females) who underwent LADG with using a Nathanson retractor (Group B) were compared in respect of the operation time, amount of bleeding, postoperative liver function and postoperative length of hospital stay (since we have encountered cases that developed severe postoperative severe liver dysfunction has occurred withafter surgery using the use of the Nathanson retractor in our hospital, we changed the position of thise retractor is changed every 15 minutes for providing relief from ofcongestion; however, while using our new retractor, no intraoperative change of the retractor position for congestion relief is required with our retractor).

Conclusions: The results suggest that use of the novel U-shaped liver retractor during laparoscopic surgery is useful, especially because of the lack of need for frequent position changes to ensure as it necessitates less position change for safety and provide relief from congestion relief and the leaves only a small scar that results on the abdominal wall. 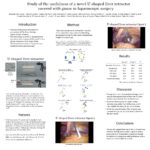