Stress Response and Well-being After Open, Laparoscopic and Notes Transgastric Uterine Horne Resection – An Experimental Study in a Porcine Model

Introduction
The aim of this study was to investigate whether a NOTES procedure induces less inflammatory response than corresponding open and laparoscopic surgery. Natural Orifice Translumenal Endoscopic Surgery (NOTES) is a minimal invasive surgical method where the abdominal cavity is accessed through the stomach, colon or vagina without skin incisions why it is believed to induce less trauma than other surgical techniques. The degree of surgical trauma can be assessed by measuring serum levels of acute phase proteins as CRP and TNF- α.

Methods & Procedures
Thirty Swedish landrace pigs were randomized into three groups: open, laparoscopic or transgastric uterine horn resection. All animals were kept on liquid diet for three days before the study. At induction of anaesthesia one dose of Cefuroxime was given. The left uterine horn was carefully dissected from its mesentery using electrocautery and then ligated at its base. Venous blood samples were taken at start and end of each procedure and postoperatively at day 1, 3, 5, 7, 14, 21 and 28 for analysis of CRP and TNF-α. The animals were observed postoperatively and time till standing up and starting to drink/eat was recorded. Body temperature and weight were recorded at postoperative day 1, 3, 5, 7, 14, 21 and 28. Analyses of CRP and TNF-α were performed using pig-specific ELISA-assays.

Results
The total procedure time was significantly longer using NOTES technique, median 121 min (94-155), compared with open surgery, median 22 min (14-27) and laparoscopy, median 37 min (20-45) (p<0.0001). Despite the longer operating time there was a non-significant tendency for shorter recovery time for the NOTES animals. (Time till standing up) Twenty-seven animals survived for four weeks. One animal in each group was euthanized prior to four weeks. All animals gained weight as expected during the 4-week-period with no significant differences. (Mean weight at 4 weeks: 46.3±4.0 kg). However, during the first postoperative week only animals in the NOTES group showed a significant weight gain p=0.007 not found in the other two groups. There was no difference in CRP-levels pre- and post-operatively. However, on post-operative day 1 CRP was significantly lower in the NOTES group compared with the open and laparoscopic groups (mean 0.72 ± 0.22, mean 0.98±0.26 and 0.97±0,20 respectively, p=0.048). On post-operative day three and on the following time points there were no significant differences between the groups. The CRP-levels were normalized to pre-operative values on day 14. TNF-α in all animals started at mean 0.0061 ± 0.008 pg/mg protein with no differences between the groups. At the end of procedure and throughout the study there were no significant changes in TNF-α levels in the laparoscopic and NOTES groups. At POD 3 the open surgical group showed significantly higher TNF-α levels than the other groups (p=0.036).

Conclusion
Despite the longer operating time the transgastric NOTES approach seems to be less traumatic than open or laparoscopic uterine horn resection in this porcine model. 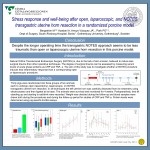