AIM: Symptoms of prolapsing-internal-hemorrhoids persist in some patients post hemorrhoidal banding (HB) therapy necessitating re-intervention with stapled hemorrhoidopexy (SH). We evaluated the success rate of HB, causes for re-intervention, and satisfaction with SH.

METHOD: Between November 2010 and October 2011, 211 patients with stage 3 internal hemorrhoids underwent HB. Nineteen (9%) of these patients, aged 18-77 years, went on to require SH for persistent symptoms. All these patients had resolution of hemorrhoids at 3 weeks postoperatively. Twelve of these patients, nine females and two males, participated in a telephone survey. Data were collected on postoperative pain, frequency of bowel movements, pain with bowel movements, frequency of blood in stool (if any), presence of external hemorrhoids, use of stool softeners at week three and week six after surgery, complications, time to functional recovery/return to work, and patient satisfaction.

RESULTS: 192 patients (91 %) had successful resolution of symptoms following HB. The indications for SH were continued bleeding or pain. The pain post-SH was well tolerated, with four of the nineteen patients needing pain medication refills. Of the twelve patients who participated in the telephone survey, frequency of bowel movements was an average of 2.5 per day at 3 weeks and 2.15 at six weeks. Five patients had pain with defecation at three weeks and six. Four had blood in stool at three weeks, and five at week six. Five had external hemorrhoids at weeks three and six. Seven needed stool softeners at three weeks and six at week six. Average time to functional recovery/return to work was 14.4 days. Satisfaction was 80%.

CONCLUSION: A small percentage of patients require further treatment for internal hemorrhoids which prove refractory to HB treatment. One option for these patients is SH, which is a safe and effective treatment. SH surgery is low risk, has few complications, and has an overall good satisfaction rate with short functional recovery/return to work time. 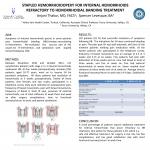