Enterotomies during laparoscopic ventral hernia repair pose a serious problem with complications ranging from abdominal sepsis, mesh infection requiring removal of mesh, prolonged hospital stay, and to even death. In the case presented, we performed a staged procedure for the repair of a difficult ventral hernia which required very extensive lysis of adhesions. A 78 year old female underwent a Hartmann procedure for perforated diverticulitis following prior colectomy in 2007. She developed a parastomal hernia 4 years later, which was repaired using biologic mesh and her colostomy was reversed concurrently without any complications. She returned with an enlarging incisional hernia with complaints of intermittent pain at the site of the hernia. She elected to undergo laparoscopic ventral hernia repair, and abdomen was entered through the left upper quadrant using an optiview technique avoiding the prior surgical sites. Upon entry, extensive adhesions were noted throughout the abdomen with loops of small bowel firmly adherent to the ventral hernia sac as well as the prior stomal site. The fascial defect measured 15 cm in diameter. Lysis of adhesions was carried out laparoscopically for 5 hours. During the procedure, an area of serosal injury was noted and repaired primarily. Although there was no obvious enterotomy or apparent spillage during the operation, the possibility of microscopic enterotomies or additional areas of serosal injury could not be excluded. To prevent serious septic complications including mesh infection related to possible unrecognized enterotomies, the decision was made to stage the repair with admission of the patient for 48-hour observation. During the observation period, there were no signs or symptoms indicating peritoneal contamination from the extensive lysis of adhesions. Physical exam was benign other than some soreness at the incision sites, labs only showed mild leukocytosis which was expected immediately post op and subsequently decreased the following day, and vital signs were stable. On post operative day 2, the patient was returned to the operating room for definitive repair of the ventral hernia using mesh. The abdomen was explored laparoscopically, revealing few adhesions which were easily taken down and there were no signs of bowel injury or leak of intestinal contents. The mesh was measured, inserted into the abdomen, and fixed over the hernia site laparoscopically. The patient recovered without any complications and was discharged home in stable condition two days later.
This staged laparoscopic approach for incisional hernias requiring extensive lysis of adhesions with possible unrecognized enterotomies provides an attractive option for successful repair with decreased chance of catastrophic complications. The short period of observation necessary is preferable to the possibility of an extended hospital stay, reoperation to remove an infected mesh and sepsis. Further studies are needed to set parameters for application of this approach, but this case presentation demonstrates a viable conservative option in dealing with difficult incisional hernia repairs. 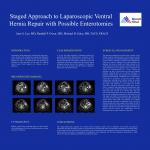