Sleeve Gastrectomy Versus Roux-en-Y Gastric Bypass: A Retrospective Review of Weight-loss and Resolution of Co-morbidities

Methods: A retrospective chart review at a bariatric center associated with a tertiary medical center was conducted to analyze the quantity of excess weight loss (EWL) and the resolution of T2DM, HTN, OSA, and GERD in 26 patients undergoing LRYGB and 26 patients undergoing LSG between 01/01/2008 and 2/8/2010. Subjects were matched primarily based on age, gender, pre-operative weight and BMI, and secondarily on co-morbidities. Statistical analysis was performed using McNemar’s test for categorical variables and paired t test for continuous variables.

Conclusions: Our data shows a significantly greater percentage of EWL at one year in patients undergoing LRYGB compared to LSG. There was a significant resolution of co-morbidities associated with obesity in both groups, but without a significant difference between them. Our results confirm that LSG is a viable alternative to LRYGB in the resolution of obesity related co-morbidities, despite greater weight loss obtained in the LRYGB group. 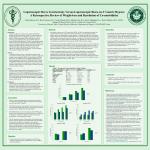