Introduction: The aim of this meta-analysis is to assess the post-operative prevalence of GERD in adult patients who underwent sleeve gastrectomy (SG) compared to baseline, as well as to other types of bariatric surgeries. Gastroesophageal reflux disease (GERD) is a known obesity-related comorbidity. With bariatric surgery currently proven to be the most effective therapy for morbid obesity, many different types of bariatric surgeries have been performed, including SG. Controversy exists regarding the best surgery for bariatric patients with GERD, as some studies have suggested that SG does not improve, and may worsen GERD post-operatively.

Methods and Procedures: An extensive search of electronic databases including PubMed, EMBASE, and the Cochrane Library and Scopus was performed, as well as searches of the grey literature and hand searches of select journals. The primary outcome measure was the prevalence of GERD at 12 months post-operatively. The post-operative GERD prevalence after SG was compared to pre-operative baseline, as well as to the prevalence of GERD after Roux-en-Y gastric bypass (RYGB) and adjustable gastric banding (AGB). The secondary outcome was the resolution of diabetes post-SG. Pooled odds ratios were calculated using random-effects models for meta-analysis. 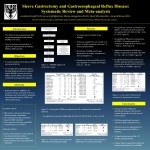