Aim: Single site technology and fluorescent imaging represent the latest innovations in minimally invasive surgery. Robotic technology can overcome some of the disadvantages of the laparoscopic single-site approach, because it restores triangulation and avoids instrument collision. Moreover, the use of indocyanine green (ICG) with the Da Vinci Fluorescence Imaging Vision System allows a real-time visualization of the biliary anatomy, avoiding possible bile duct injuries due to misperception and misinterpretation of the biliary anatomy. The aim of our study was to review the results of our first single-site robotic cholecystectomies with ICG fluorescent cholangiography.

Methods: 72 robotic single-site cholecystectomies with ICG fluorescence cholangiography were performed between July 2011 and February 2013. All patients received a dose of 2.5 mg of ICG 45 minutes prior to the beginning of the surgical procedure.

Results: The mean operative time, including the docking of the robot, was 84 min (range: 35-230). No minor or major complication occurred in our series. Morbidity and mortality rates were nil. All cases were performed in an outpatient regime. The cystic duct and common bile duct were successfully visualized with ICG in 100% and 98.6% of cases, respectively.

Conclusions: Single-site robotic technology in combination with ICG fluorescent cholangiography is a safe and feasible technique that could potentially improve postoperative morbidity after cholecystectomy. 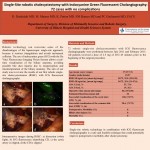