Single-port access cholecystectomy. A comparative study of 150 patients with the gold standard

INTRODUCTION
Single Port Access (SPA) surgery, also known as Single Incision Laparoscopic Surgery (SILS) or One Port Umbilical Surgery (OPUS), amongst others, is an advanced, minimally invasive surgical procedure in which the surgeon operates exclusively through a single access port. Since the whole procedure is performed typically through the umbilicus, it does not leave any visible scar, unlike traditional laparoscopic surgery. Patients should benefit from less post-operative pain, less blood loss, faster recovery time, fewer complications and better cosmetic results.
We present preliminary results of our experience in single-port access cholecystectomy compared with a simultaneous series of conventional laparoscopic cholecystectomy performed during the same period of time.

METHODS AND PROCEDURES
We communicate a retrospective analysis of collected data from 150 patients subjected to SPA (SPAC) or multiport laparoscopic cholecystectomy (LC) during 2008 and 2012. Selection criteria included absense of previous cholecystitis and/ or cholelythiasis that required hospital treatment, no previous supramesocolic surgeries and BMI< 35 kgr/m².
Three conventional trocars were utilized in the LC group. SPAC were performed with an R-Port™ (Advanced Surgical Concepts; Whilock, Brey, Ireland). The R-Port™ consists of an external disc which has three valves with a gel interface, which fits onto a double-layered plastic cylinder that serves as the common channel or a single port. The plastic cylinder, when deployed, is held in place by an inner ring very much like a miniature hand port. Three separate valves allow insertion of one 12 mm and two 5 mm or three 5 mm instruments at the same time. A 5 mm 30 degree videolaparoscope was used, combined with 5 mm conventional laparoscopic instruments in both groups. 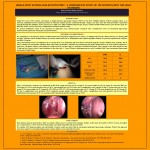