INTRODUCTION: Single-incision laparoscopic colectomy (SILC) has emerged as a safe and feasible approach for the surgical treatment of benign and malignant colorectal diseases. Although the approach averts the use of multiple port sites, certain limitations, such as inadequate visualization and insufficient exposure through an umbilical incision, may restrict its utilization for more complex procedures requiring rectosigmoid resection. As a result, we have developed a modified approach to overcome many of the technical challenges and avoid the high rate of ventral hernias associated with an umbilical extraction site. We present our experience with “Single Plus One” technique for anterior rectosigmoid resection.

METHODS AND PROCEDURES: Between June 2011 and July 2012, “single plus 1” anterior rectosigmoid resection was performed by one of two colorectal surgeons. Each procedure commenced with placement of a 5-mm umbilical optical port for initial laparoscopic exploration with a 5-mm 30° camera, followed by placement of a single-incision access device through a 4-cm Pfannenstiel incision (Figure 1a). Standard non-articulated laparoscopic instrumentation and an energy device were then introduced through three trocars on the port. A medial-to-lateral approach was performed with complete dissection in the retroperitoneal followed by division of the pedicle and lateral mobilization (Figure 1b). Splenic flexure takedown was performed as clinically indicated (Figure 1c). Transrectal division was performed intracorporeally and the bowel was extracted through the Pfannenstiel incision. A primary intracorporeal end-to-end stapled anastomosis was fashioned in each case. Demographic, intraoperative and postoperative data were collected and analyzed.

CONCLUSIONS: “Single plus one” laparoscopic colectomy is an efficacious approach combining the advantages of single-incision and reduced port techniques to facilitate rectosigmoid resection. The approach optimizes visualization and exposure, limits instrument collisions, provides enhanced cosmesis, and reduces the risk for umbilical extraction site hernia. Comparative studies are warranted to further evaluate benefits and limitations of this approach. 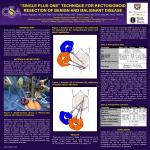