Introduction
Laparoscopic colorectal surgery has become increasingly popular option owing to its advantages of faster post-operative recovery, decreased length of hospital stay and better post-operative pain management compared to open procedures. However, laparoscopic surgery has been criticized for being more costly than open cases due to longer operative time and conversion of laparoscopic cases to open. This study aimed at evaluating our institutions cost analysis of laparoscopic cases in comparison to open.
Methods and Procedures
The Henry Ford Health System No-Harm Campaign database was used for this study. The database compiles clinical, claims and NSQIP data for an ongoing quality assurance project. Queries were made for the years January 2009-January 2012 of patients that underwent colectomies using CPT codes. Patient account cost was provided by the Operational Analytics department’s year end summaries. Differences in cost between open and laparoscopic cases were analyzed using univariateand t-test analysis.
Results
A total of 447 patients who underwent colectomies at Henry Ford Hospital were included in the study. 65.1% (291) underwent open colectomy and 34.9% (156) underwent laparoscopic colectomy, of which 47 of the cases were done robotically. Open cases’total technical cost was found to be $3,170 more than laparoscopic cases ($13,000± $9,637 vs$9,400± $8509, P<0.05). The variable cost was only found to be $1800 more for laparoscopic cases as compared to open ($15,100 ±4,900 vs$13,200 ± 5,600, P= 0.001). In addition, open colectomy cases were found to have increased in hospital LOS (10.56 ± 11days vs 6.38 ± 4.4 days, P<0.05), increased ICU stays (2.19 ±8.6 days vs 0.74 ± 3.2 days, P=0.048) and more ventilator dependent days (0.57 ± 2.2 days vs 0.19 ±0.7 days, P= 0.04).
Conclusion
Although laparoscopic colorectal surgeries have been found in the past to be more costly compared to open cases, our institutional review found that laparoscopic cases are relatively less expensive. The added benefit of shorter hospital and ICU LOS as well as less vent dependent days in the laparoscopic group make it an even more cost effective choice. 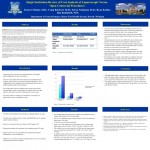