Objective: The aim of this study was to clarify oncological results of laparoscopic intersphincteric resection (ISR) for very low rectal cancer near the anus.

Conclusion: Laparoscopic ISR was feasible for stage I rectal cancer near the anus. For stage II or III rectal cancer, additional preoperative therapies might be needed to reduce the risks of their local recurrences. 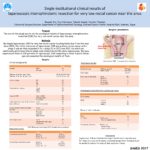