INTRODUCTION
GISTs are potentially malignant tumors and clinical practice guidelines for GISTs recommend surgical resection if it can be completely resected. Laparoscopic gastrectomy is now being accepted as a safe and feasible surgical procedure for GISTs owing to its better postoperative outcomes. In recent years, SILS has been performed for GISTs by some laparoscopic surgeons interested in further minimizing the invasiveness of laparoscopic surgery. In this current report, we present the cases with GISTs treated by SILS and traditional laparoscopic partial gastrectomy respectively to assess the safety and feasibility of SILS.

METHODS
Data of gastric GISTs who had laparoscopic treatment were analyzed retrospectively. Of 39 patients at Shengjing Hospital of China Medical University between April 2008 and December 2012, 19 cases were treated by SILS partial gastrectomy (SILS group). Traditional laparoscopy was performed in the other 20 cases (conventional group). All the laparoscopic operations were performed by the same experienced surgeon.
Demographic data, operative details, recovery parameters, and details of the specimen were obtained and analyzed based on the information obtained from the medical records. The location of tumor was evaluated by preoperative CT and EUS, also it was confirmed during the operation. Tumor size, grade and malignant risk were evaluated by pathology.
Our standard clinical practice includes evaluating patients every 6 months until 5 years after operation with imaging and endoscopy to confirm the recurrence, and the adjuvant Glivec were performed for the patients with intermediate and high risk.

RESULTS
The mean age and BMI were similar. Female were predominant in both groups (16female vs 3male, 12female vs 8male, respectively). The tumors can be seen at the fundus (9 vs 8), greater gastric curvature (3 vs 2), lesser gastric curvature (4 vs 5), the anterior (1 vs 1) and the posterior wall (2 vs 4). Tumor size (2.8±1.7 vs 2.6±1.7cm, p=0.716) and malignant risk grade were similar in both groups.
All the patients were performed partial gastrectomy successfully. The only significant difference between the two groups was operative time, which was shorter in SILS group (99.0±14 vs 112.2±24.5minutes, p=0.045). Though the blood loss was less in SILS group, there was no statistical difference between them (49.5±15.4 vs 60.3±22.4ml, p=0.09). And the mean postoperative hospital stay was similar in both groups (12.8±3.2 vs 12.3±2.6days, p=0.529). No cases were converted to open surgery, and there were no conversions to traditional laparoscopic surgery in SILS group. The resection margins were tumor free confirmed by pathology. No intraoperative or postoperative complications such as anastomotic leakage, bleeding, anastomotic stenosis or incision hernia were experienced.
All the patients were ambulant on the first postoperative day and regained liquid diet on the first postoperative day. 4 patients with intermediate risk in both groups were given Glivec by oral administration as adjuvant therapy for one year. During the median follow-up of 28 months, there was no disease recurrence on endoscopy and on CT.

CONCLUSIONS
Compared with the traditional laparoscopic procedure, SILS in gastric stromal tumors is feasible and safe when performed by experienced surgeons. 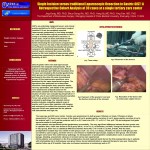