Introduction: As proficiency with single-incision pediatric endosurgery (SIPES) increases over time, more challenging operations such as splenectomy are being performed. While the ultimate goal is to perform a safe operation, a surgeon may wish to know at the onset of an operation what anatomical and technical factors contribute to the need for additional ports. This aspect of SIPES splenectomy, for which there is sparse literature, has yet to be addressed. The objective of this study is to identify such factors, allowing surgeons to gauge single incision appropriateness and to potentially tailor technique for optimal results.

Results: Thirty-seven patients eighteen years of age and younger underwent attempted SIPES splenectomy. Two were converted to open operations and were excluded from analysis. Of the remaining 35 laparoscopic operations, 15 (42.9%) were completed with additional ports. The attached table provides a comparative analysis of clinical and procedural characteristics in SIPES operations and cases where additional ports were required. Gender, age, BMI, splenic weight, diagnosis for which splenectomy was being performed and the presence of accessory spleens did not significantly contribute to the need for additional ports. The only factor to reach statistical significance (p < 0.05) was the number of channels present in the access device.

Conclusions: Completion of splenectomy laparoscopically through a single incision is associated with the decision to utilize an access device with four channels over one with three. Anatomical variables do not appear to affect the ability to perform SIPES splenectomy. 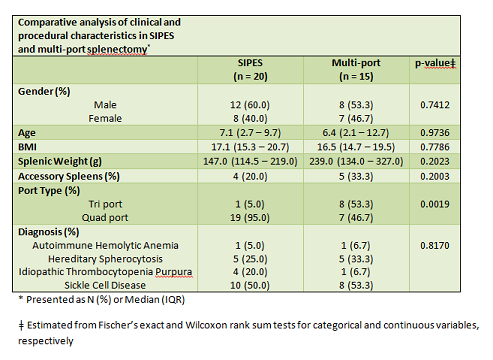