(BACKGROUND) Inguinal hernia repair is the most common procedure in general and visceral surgery worldwide. Laparoscopic Transabdominal preperitoneal mesh hernioplasty (TAPP) has been also popular surgical method in Japan. Single incision laparoscopic surgery (SILS) is one of the newest branches of advanced laparoscopy, and its indication has been spread to not only simple surgery such as cholecystectomy, but also complex surgery. Herein, we report our experience with single incision laparoscopic TAPP approach (S-TAPP) for Japanese patients with inguinal hernia.

(PATIENTS AND METHODS) A consecutive series of 100 patients (88 male, 12 female) who underwent S-TAPP during June 2010 to March 2013 in a single institution. Eleven of the patients had bilateral inguinal hernia, and all others had unilateral hernia. The mean follow-up was 488 days. The average age of the patients was 61.7 ±16.1 years. Establishment of the ports: A 25-mm vertical intra-umbilical incision is made for port access. One 5-mm optical port and two 5-mm ports were placed side-by-side through the umbilical scar. Surgical procedure: The procedure was carried out in the conventional fashion with a wide incision in the peritoneum to achieve broad and clear access to the preperitoneal space, and an appropriate placement of polypropylene mesh (3DMaxTM light, Bard) with fixation using the tacking device (AbsorbaTack®, Covidien). The hernia sac is usually reduced by blunt dissection, or is ligated and transected with ultrasound activated device. The peritoneal flap is closed by one suture with 4-0 PDS and the 6-7 tacks using AbsorbaTack®.

(RESULTS) In one patient, we encountered a sliding hernia on the right side having sigmoid colon as content of the sac. There were two recurrence cases after surgery of anterior approach, and two cases after prostatectomy. In all cases S-TAPP was successfully performed, no additional trocars were required, and there were no conversions to conventional laparoscopic or open inguinal hernia repair. There was no intra-operative complication. The mean operative time was 97.9±32.9 minutes for unilateral hernia, and 136.5±21.8 minutes for bilateral hernia. Blood loss was minimum in all cases but 25g in one case. The average postoperative stay was 8.1±2.2 days. There was one recurrence case (0.9%) with the right external inguinal hernia 16 months after the surgery for the right internal hernia. There was no severe complication after the surgery, but there were 6 seromas (5.4%) and 2 hematoma(1.8%). Two patients had blunt tactile sense in the area of the lateral femoral cutaneous nerve (1.8%), which improved in two months.

(DISCUSSION) Our results suggest that S-TAPP is a safe and feasible method without additional risk. Moreover, cosmetic benefit is clear. However, further evaluation for postoperative pain and long-term complications compared to standard laparoscopic TAPP mesh hernioplasty should be required. 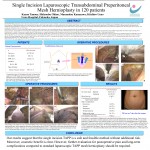