Introduction: Single incision laparoscopic surgery (SILS) has been described in the urologic, gynecologic, bariatric and, more recently, colorectal surgical literature. Single-port colectomies have only been described as case-reports. We herein describe our experience to date with the use of single incision laparoscopic surgery for total proctocolectomy with ileoanal anastomosis.
Patients and Methods: All patients who have undergone SILS total proctocolectomy and ileoanal anastomosis were identified from an IRB-approved laparoscopic database. Data was collected via chart review. All procedures were performed with use of the 5mm Olympus EndoEye and traditional laparoscopic instruments.
Results: 5 patients were identified between June 2009 and September 2009. Mean age was 36 years (range 13 to 47). There were 3 males and 2 females. Mean body mass index was 21.2 (range 15.5 to 25.9). Diagnoses included ulcerative colitis (n=4) and familial adenomatous polyposis (n=1). Mean American Society of Anesthesiologists score (ASA) was 2. 3 of the 5 patients had previous abdominal surgery. All 5 patients had a SILS™ (Covidien, Mansfield, MA) port placed at the planned ileostomy site. No other abdominal incisions were made. Average operative time was 219 minutes (range 137 to 278). Average estimated blood loss was 117 mL. There were no conversions to either a conventional laparoscopic or an open procedure. Average time to return of bowel function was 2 days and average length of stay was 4 days (3-6). Post-operative complications included two patients that were admitted to an outside hospital on postoperative day 15 with partial small bowel obstructions at the stoma site. Both resolved with conservative management. Two patients had their ileostomies reversed at 4 weeks and 6 weeks postoperatively with the other three scheduled in the near future.
Conclusion: SILS total proctocolectomy with ileoanal anastomosis is a safe minimally invasive technique. Additional studies are needed to compare SILS approach to conventional laparoscopy and open surgery with respect to operative times, convalescence and outcomes. 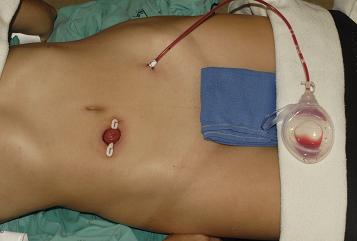