Introduction: Laparoscopic splenectomy is currently considered the gold standard in elective splenectomy. This study evaluates the safety, efficiency and efficacy of single incision laparoscopic (SIL) splenectomy as compared with the gold standard. It is our belief that SIL splenectomy is an improved technique with one hidden umbilical incision that permits concomitant organ removal without the need for another skin incision. This improves cosmesis, decreases chance of wound infection and may decrease postoperative pain. Laparoscopic surgeons should learn SIL splenectomy not only because of the aforementioned benefits, but also because of its straightforward conversion to multiport or midline open incision in complicated situations.

Methods: Patients that underwent SIL splenectomy with or without cholecystectomy were categorized by age, sex, ASA score, operative drain placement, estimated blood loss, length of stay, morbidity and mortality. Patients were not excluded from the procedure based on age or comorbidities.

Results: Procedure time of SIL splenectomy was equivalent to laparoscopic splenectomy (compared to results by Rescorla, 2007). SIL splenectomy with concomitant cholecystectomy had decreased operative time (compared to results by Rescorla, 2007). Estimated blood loss was an average of 56mL and no postoperative transfusions related to surgery were required. Length of hospital stay was an average 2.7 days with one patient staying longer for reasons unrelated to the surgery. No mortalities occurred. A small subdiaphragmatic abscess was our only morbidity and this was successfully drained by radiology. 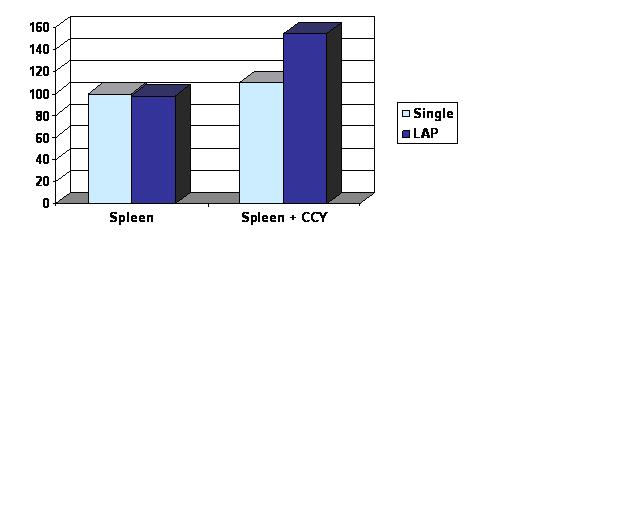 Conclusions: Our experience with single incision laparoscopic splenectomy with or without cholecystectomy has provided evidence of a safe, efficient and practical technique.Concomitant organ extraction with SILS requires less operative time than current multi-organ laparoscopic techniques. 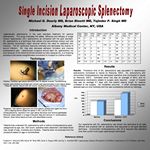