(BACKGROUND) Laparoscopic Nissen fundoplication has been recognized as the standard procedure for gastroesophageal reflux disease (GERD).
Single incision laparoscopic surgery (SILS) is one of the newest branches of advanced laparoscopy, and its indication has been spread to not only simple surgery such as cholecystectomy, but also complex digestive surgery.
(PATIENTS AND METHODS) We performed single incisional laparoscopic Nissen fundoplication (SILN) for GERD in 11 patients during April 2010 to August 2011. Pure SILN (P-SILN) was performed in the former 6 patients, and SILN plus one puncture of a thin instrument (SILN+1) was performed in the later 5 patients.
Establishment of the ports: A 25-mm vertical intra-umbilical incision is made for port access. One 5-mm optical port and two 5-mm ports were placed side-by-side through the umbilical scar. An additional instrument (Roticulator™, Covidien, Tokyo, Japan) for liver retraction was placed through the umbilical scar for P-SILN, or an additional 3-mm grasper instrument for assistance was directly inserted through the upper left abdominal wall for SILN+1.
Original method of Liver Retraction: PDS loop suture (PDSII, a needle 48mm, thread 150cm in length; Ethicon) and a 2-0 silk thread which was passed in the loop were prepared. The PDSII was directly inserted into the peritoneal cavity through the abdominal wall. After suturing the muscle around the hiatus of the esophagus, the PDS loop was tightened at sutured place. The loop was cut and these PDS threads were taken out of appropriate places using the percutaneous suture-passing device (Lapa-Her-Closure™, Hakko, Tokyo, Japan), and fixed above the skin with clamps. Finally, the left lateral segment of the liver can be retracted with three threads (Two PDS and one silk thread) of the different direction.
Surgical Procedure: The procedure was carried out in the conventional fashion with dissection of the esophagus and the cardia of the stomach, which was brought down below the esophageal hiatus with adequate length and without tension. The crura were identified and dissected, and short gastric vessels were divided to mobilize the gastric fundus. Closure of the crura and a floppy Nissen fundoplication were performed with 2-0 polypropylene (Prolene, Ethicon, Tokyo, Japan) sutures tied extra-corporeally with the pre-tied knot technique.
(RESULTS) There was no conversion to the open surgery, and no intra-operative complication. The preoperative complaint improved after surgery in all patients. There was no significant difference in the operative time and the blood loss between P-SILN and SILN+1 (221.7±24 vs 207±45.4min, 18.2±25.6 vs 19±23.8g, respectively). The conversion rate to the conventional surgery in P-SILN was 33.3 % (2/6), and that in SILN+1 was 0 % (0/5). There was no significant difference in sex, age, BMI, post-operative stay, and post-operative complication.
(DISCUSSION) Our results suggest that SILN is a safe and feasible method. Although P-SILN was excellent in cosmetics, the conversion rate to the conventional surgery was high. Since SILN+1 can be performed entirely same as the conventional fashion and its cosmetic outcome is permissible, it seems that SILN+1 is superior to P-SILN. 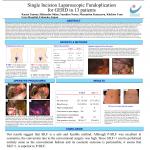