Single Incision Laparoscopic Colectomy for Neoplasms of the Colon

Background: Single incision laparoscopic surgery is now getting performed for cosmetic reasons and is commonly used for cholecystectomy and appendectomy. We have performed right colectomies using single incision laparoscopic surgery in patients with benign adenoma and colon cancer.
Patients and Method: We performed right colectomy with D1 lymph node dissection for a case of adenoma, and D2, and D3 lymph node dissection for two cases of colon cancer. A 2.5 (D1) to 3.5 (D2 and D3) cm longitudinal incision was made on the patients’ navels. The subcutaneous tissue was dissected widely. Three 5mm trocars were inserted from the same incision with ample distance between each other. The pedicle of the ileocolic vessels were retracted with a mini-loop retractorTM (Tyco Health Care Japan). The D1 dissection colectomy for the patient with adenoma, was complicated by massive adhesion due to a previous appendectomy. The adhesiolysis preceded the mobilization of the colon, and the vessels were ligated and cut extra-corporeally without requiring another skin incision but a second fascial incision was necessary. For the patients requiring D2 and D3 lymph node dissection, dissection proceeded to mobilization of the colon. Ileum and colon were cut extra-corporeally in both operations, and anastomosed by linear stapler using a functional end to end technique. A Drain tube was not inserted. The fascia and peritoneum were closed with 2-0 VicrylTM. The dermis suture was made with 5-0 VicrylTM with at least one anchoring suture to the fascia at the bottom of the navel.
Results: The operation time was 200, 210, and 225 min. for D1 plus adnesiolysis, D2, and D3 dissections, respectively. The blood loss during each operation was 10, 40, and 90ml, respectively. There were no serious complications during or after each operation. For all cases, an articulating dissector or grasper was not necessary.
Conclusion: Single incision laparoscopic colectomy for colon neoplasm can be performed safely and should be considered in each institute. The port placement is an important consideration when using this technique. 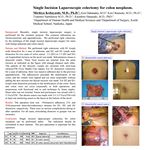