Introduction: Single incision laparoscopic surgery (SILS) has been described in the urologic, gynecologic, bariatric and more recently colorectal surgery literature. Single-port colectomy for cancer has only been described as case-reports. Our institution was the first to report SILS sigmoid and right colectomy for cancer. We herein describe our experience to date with the use of SILS and segmental colectomy for neoplasia or polypoid disease.
Patients and Methods: All patients who have undergone SILS segmental colectomy for a diagnosis of polyps or cancer were identified from an IRB approved laparoscopic database. The umbilicus was the site of SILS port placement and specimen extraction (Fig 1 A-D). Data was collected via chart review.
Results: Twelve patients who underwent SILS colectomy at our institution were identified between December 2007 and September 2009. Mean age was 65 (range 45 to 86). There were 8 males and 4 females. Mean body mass index was 28.4 kg/m² (range 22.4 to 37.6). Diagnoses included polyp (n=7), cancer (n=4) and carcinoid (n=1). Mean American Society of Anesthesiologists score (ASA) was 2.5. Eight patients had previous abdominal surgery. Procedures performed included right colectomy (n=8), ileocolic resection (n=2), sigmoid colectomy (n=1) and colotomy and polypectomy (n=1). All patients had a single port placed at the umbilicus and average incision size was 4.1 cm (range 3 to 7.1). Average operative time was 108 minutes (range 46 to 198). Average estimated blood loss was 122 (range 70 to 250). There was one conversion to conventional laparoscopy secondary to tumor size. There were no conversions to an open procedure. Average tumor size was 4.1 cm (range 0.3 to 9). Average number of nodes harvested was 19 (range 12 to 49). Median time to return of bowel function was 3 days (range 2 to 25) and median length of stay was 4.5 days (range 3 to 29). Post-operative complications included wound infection (n=2), readmission for gallstone pancreatitis (n=1) and return to operating room on postoperative day 4 for a perforated gallbladder (n=1). Average follow up was 14.3 weeks (range 0 to 64 weeks). Two patients are recurrence free at one year follow up.
Conclusion: SILS segmental colectomy for polyps or cancer is a safe minimally invasive technique with acceptable operative times, return of bowel function and length of stay. Short term outcomes are promising. Long term follow-up is necessary to determine which patients will benefit from SILS and whether SILS may supplant conventional laparoscopy. 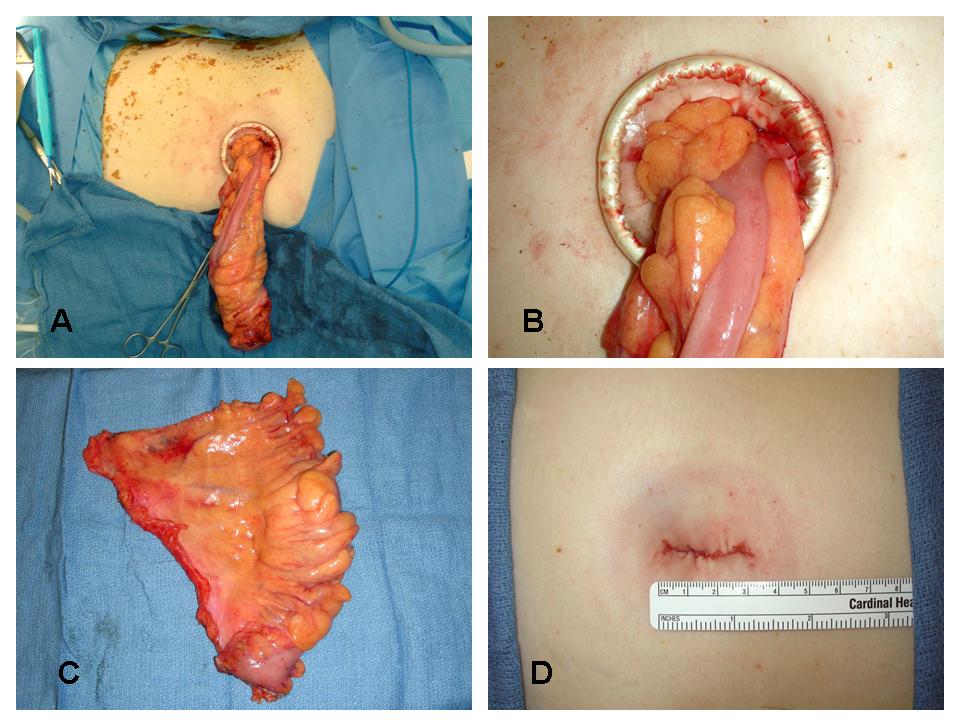