Results
In SILS group, eleven (25.0%) right hemicolectomy, 15(34.1%) anterior resection, and 18(40.9%) low anterior resection were performed. Eleven patient of 18 rectal cancer were performed a diverting stoma in SILS operation, and the diverting stoma site was used as a single incision minilaparotomy in latter seven patients of them. Additional ports were required in 10 rectal patients of during SILS operation (One additional port in 7 patients and multiport conversion to conventional laparoscopic surgery in 3 patients).

Conclusions
SILS is a feasible operation for colorectal cancer and appears to have similar results to standard conventional multiport laparoscopic colectomy, although, takes more operative time. For applying SILS in rectal cancer, much more large scale prospective studies are needed. 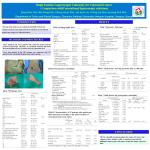