BACKGROUND
Single incision laparoscopic cholecystectomy (SILC) is a feasible and safe technique that is gaining popularity. SILC is technically demanding. Initial concerns regarding safety have limited its wide acceptance. Slowly, SILC techniques are now taught to fellows and residents in training. We report our early experience in teaching residents SILC and compare to matched LC cases.
METHODS & PROCEDURES
A retrospective review of a single institution experience in teaching upper level residents SILC is studied. Resident performed SILC were compared to junior and senior resident level performed LC. Patient (age, BMI) and operative measures (OR time, complications,stay) were compared. Patients with acute cholecystitis were excluded from the study.
LC involves four trocars: umbilical, subxiphoid and two in the right abdomen. SILC involves three periumbilical  5 mm trocars and one right upper quadrant percutaneous suture retraction of the fundus. In both techniques, the lower one third of the gallbladder is dissected from the liver using a hook with electrocautery or using blunt dissection. The cystic duct and artery are then dissected and clearly seen entering the infundibulum. The “critical view” of safety is met when the preceding steps are completed.
RESULTS
Over a period of 15 months, 20 SILC and 40 LC cases were identified and compared. The LC group was separated into junior and senior residents, summarized in table 1 and 2.
Table 1 summarizes the junior group. The patients in LC were older and more obese. The mean operative time was lower for LC but not significant. The LC group had an average OR time of 68 minutes (range 34-105 minutes) and the SILC group had an average OR time of 70 minutes (range 39-103 minutes). Blood loss was minimal and there were no peri-operative complications for either group. The length of stay was just under one day for both groups. The resident level was higher for the SILC group by two post graduate year (PGY) levels.
Table 2 summarizes senior residents completing traditional LC compared to SILC. The patient age remained different between the two groups. BMI became non significant, and OR time remained similar, 66 compared to 70 minutes. The resident cohort was more advanced in training, however significant difference remained from the SILC group.
CONCLUSIONS
The results of SILC performed by upper level residents are comparable to LC performed by junior and senior level residents. Based upon our early experience, SILC techniques can be safely taught to upper level residents. Further study is needed to assess the minimum level of experience in traditional LC that allows for efficient and safe acquisition of SILC techniques. 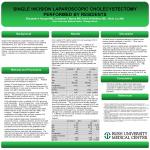