Introduction: Conventional laparoscopic colon resection for the management of inflammatory bowel disease (IBD) has been shown to be safe and feasible. Single incision laparoscopic colectomy (SILC) and reduced-port techniques have recently gained traction and present some benefits over conventional laparoscopic colectomy including lower postoperative pain, elimination of port site and placement related morbidity, and improved cosmesis. The SILC technique, however, remains challenging, especially for complex cases such as those involving multiple quadrants, bulky disease, and/or severely inflamed and friable tissues. We evaluated the short-term outcomes following single incision and single+1 extended colectomy for the management of IBD.

Methods: From June 2010 to August 2012, consecutive patients with Crohn’s disease or chronic ulcerative colitis who underwent single-incision or single+1 colectomy were included in this study. The procedures were performed by a board-certified colorectal surgeon (E.M.H). Demographc data and perioperative outcomes are presented.

Results: Over a 26-month period, a total of 17 patients (Female=8) underwent single incision or single+1 colectomy for the surgical treatment of IBD. The mean age, BMI, and median ASA was 44.4±15.8 (range: 20-73) years, 25.0±6.4 (range: 15.2-36.5) kg/m2, and 2 (range: 1-3), respectively. Nine patients (52.9%) had Crohn’s disease whereas 8 patients underwent the procedure for chronic ulcerative colitis. Thirteen patients (76.5%) were under chronic immunosuppression and/or biologic therapy. There were six patients (35.3%) who had history of prior abdominal surgery. In the majority of cases (n=10) surgery was indicated for medically intractable disease, followed by bowel stricture (n=5), and dysplasia-associated lesion or mass (n=2). Nine patients (52.9%) underwent total colectomy and 8 patients (47.1%) underwent ileocolic resection. The mean operative time was 218.1±81.6 (range: 82-422) minutes, with an estimated blood loss of 89.7±54.5 (range: 25-200) cc. There was one intraoperative complication, consisting of a splenic capsule tear, which was successfully managed with splenorrhaphy without further sequelae. There were no conversions to either another minimally invasive technique or to open approach. The mean length of hospital stay (LOS) was 4.7±2.0 (3-10) days. There were four complications in the 30-day postoperative period consisting of one anastomotic leak, one prolonged ileus, one wound infection, and a readmission for dehydration.

Conclusions: Single-incision and single+1 laparoscopic surgery are both safe and viable approaches for those with IBD requiring bowel resection. In this complex subset of patients with severe inflammatory bowel disease and chronic immunosuppression, with the recognized consequent complications, the reduced-port platform affords minimal surgical trauma and enhanced recovery without conversion to open technique. Furthermore, the reduced-port technique affords low complication, readmission, and reoperation rates. 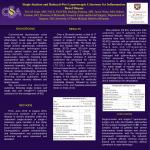