Background: Traditionally, stapled side-to-side functional end-to-end anastomoses are fashioned with a linear stapler between two bowel limbs and closure of the subsequent common enterotomy using a thoracoabdominal (TA) stapler. The combination of transverse closure of the anastomosis combined with physiologic postoperative bowel edema can narrow the anastomosis, leading to a delay in return of bowel function (ROBF) and as such, hospital length of stay (LOS). We hypothesized that the use of a double-fire technique (2 sequential fires of the linear stapler) would result in a wider anastomosis and thus more rapid ROBF and decreased LOS.

Methods: A retrospective chart review was performed on all stapled bowel anastomosis between small bowel (ileostomy reversal, small bowel resection) or small bowel and colon (right hemicolectomy, ileocolectomy) by a single colorectal surgeon between 2007-2013. A t-test analysis was used to assess differences in LOS and ROBF between single- and double-fire techniques. Contributing factors including patient diagnosis, laparoscopic versus open surgery, and type of anastomosis (small bowel to small bowel versus small bowel to large bowel) were also examined by a Poisson family generalized linear model.

Conclusions: In this series, the underlying diagnosis and type of bowel involved in an anastomosis were the primary determinants of return of bowel function and length of stay. The technique of double-stapled anastomoses does not appear to significantly expedite this process and as such, cannot be a currently recommended practice without further study. 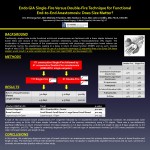