Background: In patients with symptomatic type III paraesophageal hernia, laparoscopic hiatal hernia repair with partial fundoplication is an effective treatment option. Pulmonary symptoms can feature amongst others such as dysphagia, odynophagia, regurgitation, chest pain, and impairment of quality of life (QoL). The elective surgical repair of choice at our institute is a laparoscopic hiatus hernia repair with anterior 180 degrees fundoplication (LHR). We aimed to primarily document the effect of LHR on pulmonary function and QoL with secondary clinical and radiological recurrence outcomes.

Results: A total of 50 patients had complete data sets pre- and post-operatively. The average age of the patients was 64.2 (46 – 83) and an average BMI of 29.9 (18 – 43). 78% of patients were female with 42% smokers and only 4% had documented COPD. 94% of the hernia repair included a 180 degrees anterior fundoplication, 4% Toupet and 2% Nissen fundoplications. UGI Barium swallow studies between 6-12 months showed 87.5% of repairs were without recurrence. QOL survey at 12 months showed 97.3% of patients reported no issues.

Conclusion: No significant associations were found between improvement of PFTs vs. Age, Gender, BMIM, COPD, smoking, operation type, or pre operative diagnosis. This case series from a single institute demonstrates that Laparosopic Paraesophageal hernia repair with anterior fundoplication results in objective improvement in pulmonary lung function tests and in our experience has a low recurrence rate of only 10% with very satisfactory symptom alleviation over the long term. 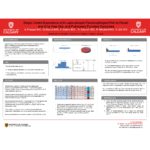