Introduction. Endoscopic resection of early stage cancers are limited by the inability to provide lymph node status. If a sentinel node can determine node status, a reliable technique to obtain preoperative node biopsies through natural orifice translumenal endoscopic surgery (NOTES) would likely have a great impact in clinical application. Our objective was to determine feasibility of performing a colonic sentinel lymph node biopsy through a single access transvaginal NOTES procedure without abdominal wall penetration.

Methods. A single access transvaginal NOTES technique was used in 7 survival pigs. A posterior colpotomy with the insertion of a standard double channel endoscope was performed in all pigs. The sigmoid colon was retracted up to the abdominal wall by two intracolonic magnets that were placed using a laparoscopic grasper under transvaginal endoscopic visualization. The magnets were under extracorporeal control which allowed the mesentery to be fully displayed within the abdominal cavity. Submucosal injection of methylene blue dye (2 ml) at a location between the two intracolonic magnets was performed using colonoscopy. Transvaginal exploration was then carried out to look for blue stained lymphatic channels and lymph nodes. Nodes were dissected using an endoscopic hook cautery and snare with grasper for retrieval. With the node grasped, the endoscope was removed through the overtube and the lymph node sent for pathology. Necropsy was performed 2 weeks postoperatively. Outcome measures were technical feasibility, safety, and postoperative complications.

Results. A transvaginal sentinel node biopsy was feasible in 6 out of 7 pigs. One pig was sacrificed at the time of procedure due to bowel perforation by the intracolonic magnet. A small rectal perforation occurred in one pig at the time of colpotomy, which was repaired primarily. The mean operative time was 86 minutes. Intracolonic magnets were placed at a mean distance of 12 cm apart in the sigmoid colon. Mean time for magnet placement was 25 minutes. Colonoscopy was then utilized to visualize the magnets and perform dye injection. Dye spillage occurred in 2 out of 6 pigs. Blue lymphatic channels leading to specific nodes were identified and resected from the mesentery by endoscopic instruments only. 1-2 lymph nodes were identified and resected in each pig and confirmed by histology. Mean lymphadenctomy time for a single lymph node was 11 minutes. The serosa of the affected bowel was examined prior to closure to ensure no injury had occurred from the magnets. A final colonoscopy demonstrated an intact mucosa with minor abrasions but no evidence of major trauma was seen at the magnet sites in all 6 pigs. All animals survived to the 2 week necropsy with no postoperative complications. At necropsy, there was no evidence of bowel injury, bowel ischemia, mesenteric hemorrhage or hematoma, intra-abdominal infection, and damage to any surrounding structures.

Conclusions. Sentinel node mapping and lymphadenectomy using a single transvaginal NOTES technique is feasible and can be performed without laparoscopic assistance. Care must be taken to avoid excessive colonic wall trauma by ensuring adequate visualization during the placement of the intracolonic devices. 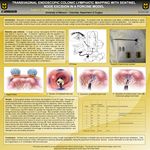