SILS Appendectomy Is Safe in All Presentations of Acute Appendicitis

Background: Single Incision Laparoscopic Surgery (SILS) has to date been applied to the management of non-complicated acute appendicitis. Its proponents advocate its use based on its cosmetic appeal. What is not known is its safety and applicability in perforated acute appendicitis. We evaluated the applicability of SILS in all presentations of appendicitis, in the pediatric population, and compared it to conventonal laparascopy (CL) performed over the same period.
Materials and Methods: Children presenting with acute appendicitis at a large Children’s Hospital over a three month period were enrolled in the study after IRB approval. They were treated by one of three pediatric surgeons. While two surgeons offered patients CL the third offered patients older than 4 years SILS appendectomy as an alternative to CL. SILS was performed using the Olympus triport and associated equipment. A total of 20 consecutive patients who underwent SILS at initial presentation were included in this study and were compared to 20 patients who underwent CL over the same time period. Demographic characteristics, clinical features, operative finding, operative duration, conversion to traditional laparoscopy or open procedure, length of stay, and wound complications were evaluated. The primary endpoint was the incidence of complications. Secondary endpoints included length of stay, incidence of wound infection and intra-abdominal abscess, and need for subsequent interventions. Data was analyzed using the student’s t-test for continuous variables and the Fisher test for categorical data. A p<0.05 was considered to represent a statistically significant difference.
Results: The mean age of the patients was 11.1 years (7-15) in the SILS group and 8.45 (2-17) in the CL group (p=0.07). There were 7 females and 13 males in each group. The mean weight of the patients in the SILS group was 47. 3 Kg (21.1-87.8) and 31.62 Kg (13.4-62.6) in the CL group (p<0.05). The mean length of stay in the SILS group was 4.2 days (2-11) and 6.5 days (2-14) in the CL group (p=0.06). The average cost of treatment in the SILS group was $34906 and $52288 in the CL group (p=0.06). The preoperative clinical features including: duration of symptoms (1.85 vs 1.68 days), presence of fever (13 vs 11), and mean WBC count (16.2 vs 14.8) were not significantly different. There were 9 perforated appendicitis in the SILS group and 11 perforated in the CL group (p=0.75). The operative time in the SILS group was 73 minutes (51-112) and 58 minutes (34-75) in the CL group (p<0.05). One patient in the SILS group underwent conversion to CL. There were no post-operative abscess in the SILS group and 4 in the CL group of whom 2 needed radiological abscess drainage (p=0.1). There were no wound infections in either group.
Conclusions: SILS appendectomy appears to be safe for all presentations of pediatric acute appendicitis in this pilot study. Performance of SILS appendectomy was associated with a significantly longer operative time but was not associated with any increase in costs. Bigger trials with larger patient populations would be useful to confirm the findings in this study. 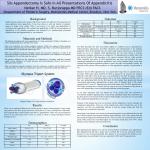