Short-term Use of a Laparoscopic Virtual Reality Simulator in One Surgical Residency Program: A Survey of Residents

Methods: Surgical residents from one residency program were given the use of a laparoscopic VR simulator (Simbionix Lap Mentor) for two weeks. Each resident was administered pre- and post-simulator surveys to determine if the simulator met their expectations and would promote more use of the simulation lab if such a machine were purchased for the institution.

Results: Fifteen residents (PGY1-5) used the laparoscopic simulator an average of 95 ± 23.2 minutes; 10 residents completed both pre- and post-simulator surveys. On a 5-point Likert-scale, the residents in aggregate were dissatisfied with the current laparoscopic training tools (2.27 ± 1.09). The majority of respondents (66.7%) said the primary asset of the laparoscopic VR simulator was the ability to perform actual cases compared to traditional trainers, while the primary limitation after using it was the lack of tactile feedback (90%). After using the VR simulator, its apparent usefulness in promoting greater lab utilization was unchanged from 3.60 ± 0.84 to 3.67 ± 1.12, p = 0.71. However, resident’s perception that the VR simulator would add to their laparoscopic simulation experience decreased from 3.30 ± 0.67 to 2.60 ± 1.17, p = 0.04.

Conclusion: Residents may anticipate a benefit from adding a laparoscopic VR simulator to their lab; however, after using it for a brief period they find it to be less useful than expected, at least in part due to its lack of tactile feedback. Despite this, the VR simulator could still potentially promote greater utilization of the simulation lab. 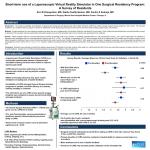