Methods: A total of 98 consecutive resections between July 2010 and September 2013 were included in this study. Conventional open approach was performed in 79 patients and laparoscopic approach in 19. Pelvic sidewall dissection was performed for clinical stage II or III low rectal cancers. We evaluated intra- or post-operative clinical results, and described the merits of laparoscopic sidewall dissections. 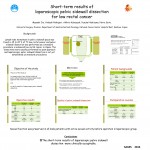