Objectives: The aim of this study is to evaluate the short term outcome of adding crural relaxing incision during laparoscopic repair of large sliding and paraesophageal hiatal hernias in terms of the rate of recurrence.

Methods: Records were reviewed to identify patients who received a relaxing incision during laparoscopic repair of large sliding and paraesophageal hiatal hernias. The patients were followed clinically, endoscopically and radiologically at 3, 6 months and then annually.

Results: From March 2012 to January 2016, 46 patients underwent laparoscopic large sliding/PEH repair, and 12 patients (26.1%) received a relaxing incision to accomplish tension-free crural closure. The median age of the patients was 72 years (range 43–73 years) and 35 patients were females. PEH was diagnosed in 9 patients (75%) while 3 patients had large sliding HH. The relaxing incision was right-sided in all patients. All crural relaxing incision were reinforced with omentum and no mesh was used for reinforcement. All the procedures were completed laparoscopically and included a fundoplication. Collis gastroplasty for a short esophagus was not necessary in any patient. No major complications occurred. During a median follow-up period of 8 months, one patient (8.3%) had asymptomatic recurrent herniation, as shown endoscopically and radiologically.

Conclusion: The use of diaphragmatic crural incision during laparoscopic repair of large sliding and paraesophageal hiatal hernias is safe and may be associated with lower incidence of recurrence. Future prospective randomized trials on a larger population with long term follow-up are needed. 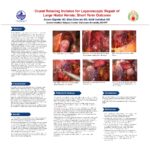