INTRODUCTION: Laparoscopic colorectal surgery is not widely used because of its technical difficulty, increased learning curve and longer operating time. The hand assisted laparoscopic surgery is a surgical technique in colorectal surgery that provides similar results to laparoscopic surgery avoiding these problems. The aim of this study is to show the clinical characteristics and results of a case series report of the same proficient surgical team.

MATERIAL AND METHODS: A retrospective study was performed with analysis of patients who were underwent Hand-Assisted laparoscopic surgery for left colectomy with any diagnosis in the ABC Medical Center IAP during January 1st 2011 to December 31st 2015 by the same surgical team.

RESULTS: During 60 months 88 patients were identified (27.27% female and 72.72% male), average age of 57 years. Twentynine patients had a history of abdominal and pelvic surgery. The most common diagnoses were non-repetition acute diverticulitis and left-sided colon cancer. The average operating time was 103.23 minutes, average blood loss of 174 ml, average recovery time of gastrointestinal function of 4.45 days, days of hospital stay of 7.98 days. The resected specimen length average was 18.42cm. For cancer surgery 15,5 lymphatic nodes were obtained on average. 3 perioperative complications, no conversion to open surgery or death were recorded.

CONCLUSIONS: Hand-assisted laparoscopic surgery is a technique that offers the advantages of minimally invasive surgery, being a safe and effective option in expert hands. 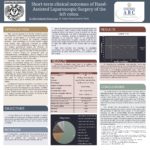