Introduction and Objective: Laparoscopic nephrectomy has become the standard of care in the academic and community setting alike. Few studies address the length-of -stay in the community setting. We describe the initial experience of a board certified general surgeon performing laparoscopic nephrectomy on a short-stay (24-hour) basis with a board certified urologist.

Conclusions: It is possible to safely perform laparoscopic nephrectomies on a short-stay (24-hour) basis in the community hospital setting by a non-fellowship trained general surgeon. 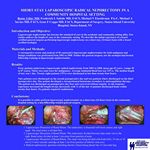