Objectives The prognosis of gastric cancer remains poor due to clinical drug resistance. Shikonin (SHK), a natural naphthoquinone, has been reported to trigger cell death and overcome drug resistance in antitumour therapy.

Methods MTT assays were performed for cell viability and Annexin V/PI staining was performed to detect the cell death. Western blot analysis and real-time polymerase chain reaction assays were used for the detection of protein and mRNA of apoptosis. DCFH-DA and JC-1 probes were used to measure the level of intracellular ROS and the mitochondrial membrane potential. The tumour restriction rate was calculated in xenograft animal models.

Results In vitro, SHK suppresses proliferation and triggers cell death of gastric cancer cells but leads minor damage to gastric epithelial cells. SHK induces the generation of intracellular reactive oxygen species, depolarizes the mitochondrial membrane potential and ultimately triggers mitochondria-mediated apoptosis. We confirmed that SHK induces apoptosis of gastric cancer cells not only in a caspase-dependent manner which releases Cytochrome C and triggers the caspase cascade, but also in a caspase-independent manner which mediates the nuclear translocation of apoptosis-inducing factor and Endonuclease G. Furthermore, we demonstrated that SHK enhanced the chemotherapeutic sensitivity of 5-fluorouracil and oxaliplatin in vitro and in vivo.

Conclusions Our data show that SHK may be a novel therapeutic agent in the clinical treatment of gastric cancer.? 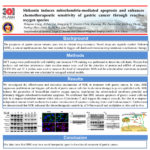