Introduction: A case of delayed post-operative urinary retention (POUR) in a female resulting in severe unilateral hydronephrosis with perinephric urinoma due to a ruptured fornix.

On POD two, the patient developed an intestinal ileus and reported inadequate pain control requiring hospital admission which had resolved conservatively.  On POD four, the patient complained of dysuria, urinary hesitancy, and right flank pain. Vitals at the time: heart rate of 93 bpm, BP of 138/86 mmHg, respiratory rate of 22, and temperature of 38.2 degrees Celsius. Physical exam elicited a soft, but distended abdomen with right CVA tenderness. Significant laboratory values included an acute WBC to 17,000 and creatinine rise from 0.7 to 5.5 mg/dL. The patient was catheterized with a post-void residual of 800 cc.

A CT of abdomen/pelvis without contrast showed severe right-sided hydronephrosis, a perinephric fluid collection, and dilated right ureter down to the level of the bladder. The patient underwent cystoscopy and retrograde pyelogram which demonstrated severe hydroureteronephrosis and a severely tortuous ureter (Figure 1). Attempts to catheterize the right renal collecting system were unsuccessful secondary to proximal ureteral tortuosity. Afterwards, a percutaneous nephrogram was performed where a stiff guidewire was successfully passed into the bladder by interventional radiology (IR) and allowed for placement of an indwelling 8-Fr double-J ureteral stent (Figure 2&3). At the end of the procedure a diversionary 8-Fr nephrostomy catheter was placed into the renal pelvis.

On post-procedure day one, the patient’s WBC and serum creatinine had normalized. Thereafter, the patient was discharged with a bladder catheter and the indwelling stent. The patient has since resumed normal voiding and both her ureteral stent and percutaneous nephrostomy have been removed.

Discussion: This case describes an axial rotation of hydroureter and ruptured right renal fornix with perinephric urinoma secondary to delayed POUR, an unusual occurrence. The treatment that was employed was not only therapeutic but also diagnostic in nature, concluding that CT should be part of the initial steps of diagnosis as it can illustrate defects within the renal pelvis, ureter, and retroperitoneal space. Thereafter, cystoscopy or IR may need to play a role in the absolute treatment of a ruptured fornix. 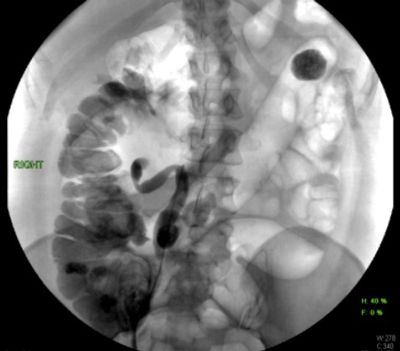 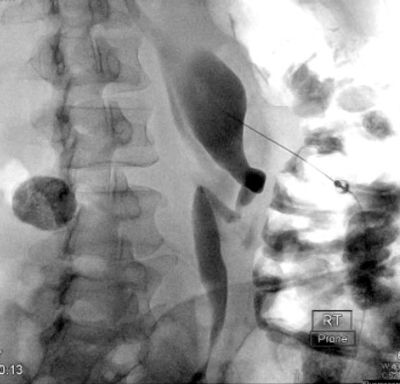 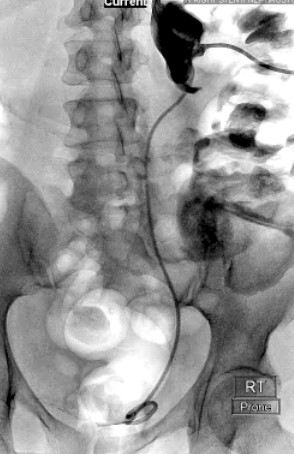