Background: The number of laparoscopic surgeries is increasing because of minimal invasion of the patient. Compared with open abdominal surgeries, they are likely to produce less postoperative paralysis of the intestine. But ileus is an important complication for laparoscopic surgeries too: sometimes it could cause death. We experienced a rare case of severe Clostridium difficile infection, not only in the colon but also in the small intestine, after a laparoscopic lower anterior resection.

Case Presentation: A 75-year- old man diagnosed with rectal cancer (adenocarcinoma). The clinical staging was cT2N0M0 cStage?. A laparoscopic lower anterior resection with covering ileostomy was conducted. there was no trouble during the operation. The patient began to eat and walk on post operative day (POD)1. Till POD2, we used prophylactic antibiotics: cefmetazole 2g/day. On POD10, however, the C-reactive protein (CRP) level and white blood cell count rose sharply. An abdominal X-ray showed some gas inside the small intestine. The discharge from the ileostomy exceeded 2000ml/day, and CD toxin was positive. We administered to him metronidazole (1500mg/day) first. Next day, his vitals got worse. While colonoscopy showed that colorectal mucosa was intact, a per-stoma ileoscopy revealed that small intestine mucosa covered with pseudomembrane. Our diagnosis: small intestine type Clostridium difficile enteritis (CDE). Because of this, the intestinal tract barrier could not function, and bacterial translocation caused bacteremia and septic shock. 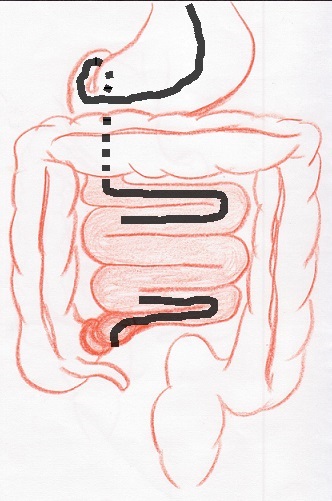 1g of vancomycin, 2g of biofermine, and 3g of glutamine dissolved in 500ml physiological saline were perfused to the small bowel four times a day.

Outcome and follow-up: The CRP level and white blood cell count were improved. On POD17, the ileoscopy showed the pseudomembrane in the small intestine peeled off and normal mucosa appeared; computed tomography indicated an enhanced level of small intestine mucosa. On POD24, however, the patient passed bloody stool and colonoscopy showed pseudomembrane not only in the small intestine but also in the colon. On POD 36, he died of CDE.

Conclusion: Paralytic ileus is an important complication after a laparoscopic abdominal surgery though it occurs less than in open abdominal surgeries. High ileostomy output, and no changes of intestinal gas in the X-ray after the operation, must be carefully watched for: paralytic ileus or enteritis may be developing. Severe CDE can also occur after laparoscopic surgery though it is rare. Early diagnosis and starting oral treatment with metronidazole or vancomycin is important. After loss of intestinal peristalsis, it is hard to administer the medicine to entire intestine. We tried the perfusion, using two ileus tubes, but could not obtain satisfactory results. We need more cases to validate and improve our treatment.