Introduction
The objective of this study was to compare a new treatment method using stent-placement with the traditional surgical suture for perforated duodenal ulcers.
Standard treatment for perforated duodenal ulcer is surgery with sutured closure. Treatment with nasogastric tube and suction is sometimes used in patients with high co-morbidity but has shown poor results. We started to use stent treatment as an alternative treatment option in old and co-morbid patients in 2009.

Methods & Procedure
Retrospective series comparing two treatments. All patients with perforated duodenal ulcer admitted to our hospital during 2009-2012 were included in a retrospective study. No randomisation was performed. Choice of treatment was based on the patients clinical status and the skills available. Age, ASA-score, method of treatment, complications and hospital stay were recorded. Surgery was performed with standard open or laparoscopic techniques. For stent treatment a partially covered duodenal stent (Hanaro, MI-tech) was placed over a guide wire through the gastroscope.

Results
In total 27 patients were included. 19 of them had surgery, open or laparoscopic. 18 had simple sutured closure and one had a BII resection. Eight patients were treated with a partially covered duodenal stent, six of these patients also received a percutaneous drain. There was no significant difference between the groups concerning age, ASA-score, complication rate or hospital stay. However, there was a tendency towards higher age, higher ASA-score and less severe complications in the stented group. Patients with complications were significantly older (p= 0.028) than those without.
The median age in the surgical group was 77 years (43-95) with a mean ASA score of 2.5. The median age in the stent group was 81 years (62-87) with a mean ASA-score of 2.9. 8/19 patients in the surgical group had complications (5 abscesses, 1 leakage, 1 respiratory insufficiency, 1 abdominal compartment syndrom). Two out of these patients died. In the stented group 2/8 patients had complications. (1 abscess, 1 multiorgan failure) The patient with multiorgan failure had a delayed diagnosis and was stented one week after admission. She died on day one post stenting. There was no statistically significant difference between the complication rates. Median hospital stay was 19 days (5-72) in the surgical group and 18 days (6-36) in the stent group.

Conclusion
Stent treatment together with percutaneous drainage seems to be a safe and effective alternative to traditional surgical closure for treatment of perforated duodenal ulcer and might be an option in co-morbid or old patients. 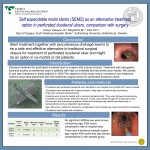