Introduction: Splenic masses often come to surgical attention after being found incidentally on imaging. It is important for surgeons caring for patients with solid splenic mass to have an understanding of the a broad range of lesions and their imaging characteristics to avoid over-treatment or under-treatment. Sclerosing Angiomatoid Nodular Transformation is a rare, benign tumor of the spleen, first described in 2004 by Martel et al. The incidence and natural history of SANT is still unclear. Most patients present with asymptomatic solitary solid mass seen incidentally on imaging. Surgeons faced with a patient splenic mass may not be familiar with this diagnosis. We report three cases of SANT treated with laparoscopic splenectomy, each presented with different clinical and imaging characteristics.

Results: The first case was a 48 years old man with multiple previously treated malignancies and newly diagnosed rectal lymphoma. During staging, he was found to have a 2.3cm splenic mass in a mildly enlarged spleen. Imaging was unable to specify the nature of the mass. The lesion was not FDG-PET avid. The patient underwent a laparoscopic splenectomy and a diagnosis of SANT was confirmed.

The second case was a healthy 44 year old lady. A splenic mass was found incidentally on an ultrasound done for biliary colic. MRI confirmed a 5.1cm lesion. A PET scan showed a hypermetabolic lesion with SUV max of 4.4. The patient underwent a laparoscopic splenectomy and the diagnosis of SANT was confirmed.

The last case was a 41 years old man found to have a splenic mass on ultrasound performed during work up for hematuria. A CT scan confirmed a 2.3cm splenic solid mass. The lesion was stable for 5 years on annual imaging. Several years later, re-imaging was performed with MRI and it had increased significantly in size to 5.7cm. The patient underwent a laparoscopic splenectomy to rule out malignancy. The diagnosis was then confirmed to be SANT.

Conclusion: SANT is a newly characterized vascular lesion of the spleen which has the potential to grow in size. Its variable clinical presentation and overlapping radiologic features made it difficult to preoperatively differentiate SANT from other lesions. Emerging series have described several characteristic imaging features on CT and MRI to assist in the diagnosis. As we gain experience, we might be able to identify a subset of patients who can be serially monitored. At this time, splenectomy is needed for diagnostic purposes and is curative 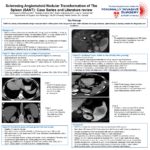