Introduction: Open technique for the placement of the first trocar in laparoscopic surgery has become the preferred method to gain safe entry into the peritoneal cavity in the last decade. This is largely due to the reduced visceral and vascular injuries with the open technique. We reported our technique in 2002 which has been accepted widely at many centres including all the units of our hospital. We now report a series of 6000 cases using this technique in our hospital.
Method: The method remains the same as the one reported by us in Surgical Endoscopy in 2002 using the umbilical cicatrix pillar (Surgical Endoscopy 2002.16:1366-1370). The minor modification in technique has been the use of the Mayo’s towel clip instead of the Allis forceps in holding the cicatrix pillar as the former tends not to slip out. During closure, Allis forceps is used to lift the divided rectus sheath and pull towards the wound, on each side to take suture bite and ensure complete secure closure. A total of 6000 cases have been done consecutively using this technique in 2 tertiary care hospitals in two cities over the last 11 years.
Results: A total of 6000 cases were operated in 11 year period in 5350 females and 650 males. There were no visceral or vascular complications in this series. Four seventy five patients (7.9%) had previous abdominal surgery. Supra-umbilical route was used in 348 cases with previous laparoscopic sterilization. Lateral entry was used with the same technique in cases with midline scars and all cases of fundoplication using similar principles. In 55 patients, midline scar was used again to gain entry from the midline. Port site hernias were seen in 25 cases (0.4%) over a follow up period of 15 months (range 1-36 months). Wound infections were seen in 56 cases (0.9%). These were largely in cases where there was wound contamination during organ retrieval. The average time to complete the procedure of trocar placement was 2 minutes (range 1-12 minutes). The average port size was 15 mm (range 12-22 mm). The average time to close the port site at the end of the procedure was 3 minutes (range 1-7 minutes).
Conclusions: The technique of open trocar placement in laparoscopic surgery has now become standardised with its safety having been well established. The procedure is safely carried out in step wise fashion by all surgeons including trainee residents. Our experience has shown that this technique is safe, effective, reproducible, easy to learn, rapidly performed and has excellent results. Based on the data available, we strongly recommend this technique as a safe method of gaining access into the peritoneal activity. 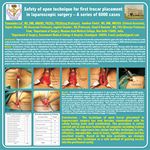