METHODS AND PROCEDURES: Medical records were reviewed of patients undergoing cholecystectomy at our institution from July 2005 to July 2011. Dissection with the goal to achieve the critical view of safety was the standard operative technique for our patients.

CONCLUSIONS: SIOC during LC is a safe practice when the critical view of safety technique is utilized and in the absence of laboratory or clinical evidence of common bile duct abnormalities. Symptomatic retained common bile duct stones will be few, and bile duct injuries rare when IOC is performed for well established indications. 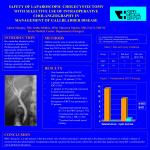