Introduction:In cases of peritonitis due to anastomosis site leakage after rectal cancer resection where surgical management was necessary, patients who have undergone open laparotomy and patients with laparoscopic exploration have been compared to determine safety and usefulness of laparoscopic method.

Methods:Out of 1146 patients who have undergone rectal cancer resection excluding patients with AP, double primary maliganancy, preoerative ileostomy, and FAP, 97 patients who suffered anastomosis sited leakage have been compared and analyzed for peritonitis sx, operation method, operation time for second op, complication after operation, hospitalization time after second operation, and location of anastomosis. In case of open laparotomy, previous op wound was used, and in case of laparoscopy, only previous trocar sites were used, not mini laparotomy site. In reoperation, intra peritoneum irrigation was done in all patients, ileostomy was done in 47 patients, and 4 patients only did a simple closure without ileostomy. Of the 47 patients who had ileostomy, 39 patients had only ileostomy, 6 patients had simple closure with ileostomy, and remaining 2 patients had reanastomosis with ileostomy.

Results: Of the total 1146 patients, 97 patients had anastomosis site leakage, and 51 patients had peritonitis symptom requiring intra peritoneal irrigation. Patients who previously had open surgery done open laparotomy for reoperation, patients who previously had laparoscopic surgery done laparoscopy for reoperation. 21 patients had laparoscopy, 30 patients had open laparotomy. There were no difference in age, sex ration, or anastomosis location between two groups. Hospitalization time after reoperation in laparoscopy group was noticeably shorter than that of open laparotomy group (16.3±10.9 days vs. 33.4 ± 19.7 days, p<0.001), and cases of wound infection where delayed suture was necessary were much lesser in laparoscopy group (0% vs 80%, p<0.001). Also, operation time was noticeably shorter in laparoscopy group (129.8±44.3 min vs. 189.7±63.3min, p<0.001). However, there were no differences between two groups in cases of intraperitoneal abscess formation where percutaneous drainage was necessary (9.5% vs 10%, p=1.000). In our hospital, starting from 2009 we also performed laparoscopy to patients with anastomosis site leakage after open laparotomy, and all 3 patients has no wound complication and hospitalization time was short. 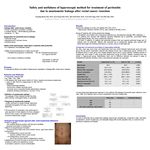