Objectives
There are an increasing number of mechanical circulatory assist devices (MCAD) being placed in end-stage heart failure patients. Morbidity from device placement is high with frequent bleeding, ischemic and infectious complications. Some devices require abdominal wall transgression for placement, creating a potential for iatrogenic abdominal complications. The outcome of patients who require non-cardiac surgery after placement of these devices is unclear. As laparoscopic interventions have been associated with decreased morbidity, our goal was to examine the impact of laparoscopic procedures in this group of patients.

Methods
A retrospective review was conducted on 302 patients who underwent MCAD placement from 2005 to 2012. Both open and laparoscopic abdominal surgeries were included and their impact on postoperative morbidity and mortality studied, respectively.

Results
There were 9 laparoscopic procedures performed out of 16 operations with one conversion to open. Seven patients had a HeartMate II in place and there was one CentroMag and one Total Artificial Heart patient. Three patients had devices for ischemic and 6 for non-ischemic cardiomyopathy. Six cases were emergency procedures. There were 5 laparoscopic cholecystectomies, 2 exploratory laparoscopies, one colostomy takedown with a colorectal anastomosis and one ventral hernia repair with mesh performed. The colostomy takedown was ultimately converted to open. The mean age of the patients was 51 (SE 5) and 8 out of 9 were male. Mean operative time was 151 minutes (SE 39). Five of nine patients were on preoperative anticoagulation with average intra-operative blood loss of 135 ml (SE 82). Two patients required postoperative blood transfusion. Seven of the patients require intra-operative vasopressor and/or inotropic support. There were 3 postoperative complications in the group. One patient suffered respiratory failure with a right lower pneumonia. One patient suffered from postoperative acute renal failure. One patient went into multisystem organ failure and ultimately died. This complication was not directly related to the surgical procedure.

Conclusion
The need for non-cardiac surgery in post MCAD patients is increasing mostly due to limited donors but also secondary to more durable and longer support from newer generation assist devices. While surgery should be approached with caution in this high-risk group, laparoscopic surgery appears to be a safe and successful treatment option. 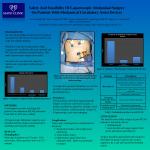