Patients and methods: A study involved 164 consecutive patients undergoing routine PAIOE between August 2012 and July 2013. As controls, 280 patients without IOE were used for comparisons from January 2010 to December 2011.

Results: Although there was no difference between the PAIOE and non-PAIOE group in the overall complication rates (19.9% vs 26.7%; P > 0.05), the complication rate related to anastomosis was lower (3.6% vs 8.9%; P = 0.02) in PAIOE group. The PAIOE group had rate of 1.8% for anastomotic leakage, 1.8% for intra-luminal bleeding and 0% for anastomotic stricture. The non-PAIOE group had rate of 5.6%, 3.0% and 0.7%, respectively. Twenty abnormalities were detected in 18 PAIOE patients (10.8%) (15 venous bleeding, 5 mucosal tearing, 2 air leak, 1 arterial bleeding and 1 anastomotic stricture). All abnormalities were corrected by proper interventions (10 reinforce suture, 9 endoscopic hemostasis and 2 re-anastomosis) (Figure). There was no morbidity related to PAIOE.

Conclusions: PAIOE appears to be a safe and reliable procedure to evaluate stability of gastrointestinal anastomosis for gastric cancer patients. More data collection and a well designed prospective study will be need to confirm the validity of PAIOE. 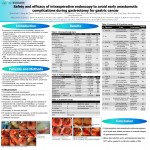