Safety and Efficacy of POEM for Treatment of Achalasia: A Systematic Review of the Literature

Introduction: Peroral endoscopic myotomy (POEM) is a novel intervention for the treatment of achalasia, which combines the advantages of endoscopic access and myotomy. Although initial results have been encouraging, laparoscopic Heller myotomy (LHM) and pneumatic dilation (PMD) are currently considered the standar of care. Over the last 8 years nearly 4,000 POEM have been performed worldwide but no randomized control trials have been reported. The purpose of this study is to perform a systematic review of the literature to evaluate efficacy and safety of the procedure.

Methods: Evidence Based Medicine Reviews, Chochrane Central Register of Controlled Trials, Ovid MEDLINE (R) including in-process and non indexed citations were searched for POEM studies using the keywords: esophageal achalasia, peroral endoscopic myotomy, endoscopy, natural orifice surgery, laparoscopic Heller myotomy and related terms. Articles published in the year 1946 to September 2014 with no language restrictions were included. Two authors reviewed the results from this search to exclude studies : a) without abstracts b) performed only in animals c) tutorial, narrative d) with less than 10 cases e) where achalasia and POEM terms were not mentioned f) that did not address efficacy and safety outcomes of interest. A third reviewer resolved any disagreements in pair review. Figure 1 outlines the process of paired review.

Results: 33 studies including 1,273 POEM procedures were identified. Five (15%) compared POEM with LHM, two (6%) evaluated results in patients with previous Heller myotomies and one (3%) in patients with previous PMD. No RCTs were available in the literature. Whitin available cohort studies, perioperative complications and postoperative symptom relief (using Eckardt score) were uniformely reported in 26 studies (79%). Pre and post manometric parameters were reported in 23 (70%). Quality of life was asessed in eight studies (24%). Long term follow up was lacking, median 7 months range 1 to 31. 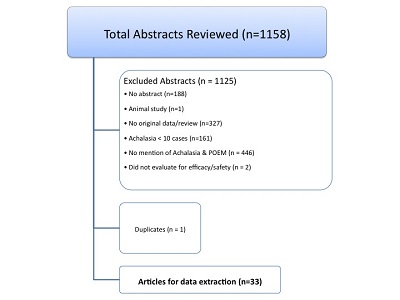