Safety and Effectiveness of Telementoring in Surgery: A Systematic Review

Background: Dissemination of advanced technologies and surgical procedures relies on successful mentoring relationships. While this model works well for formal training programs, it is not feasible for surgeons who want to integrate new procedures into their practice, and who may be geographically distant from appropriate mentors. To bridge this gap, telementoring has emerged as an alternative to on-site mentoring.  The purpose of this systematic review was to evaluate the quality of the evidence supporting the use of telementoring for surgical procedures.

Methods: A systematic literature search of bibliographic databases, and conference proceedings was performed up to March 2015. Studies were included if they reported on the use of a platform to communicate between surgeons during a clinical encounter.  Studies reporting only encounters between surgeons and patients, non-clinical telementoring or for the purposes of assessment were excluded. The Medical Education Research Study Quality Instrument (MERSQI) was used to assess study quality.

Results: Preliminary results identified 19,762 studies.  After screening, 43 were included totalling 959 telementored cases (median 6 [3-20] cases/study). Study characteristics can be seen in Figure 1. Most studies had strong methodological limitations: 32(74%) studies had no comparative group and 30(70%) described their findings without any statistical analysis. Eleven(26%) studies were comparative but none of them were randomized trials. The majority reported no added risk of intra-operative complications, and for the comparative studies, operative times were similar to non-telementored cases. Ten(23%) studies reported system failures that included set-up difficulties and loss of internet connection during telementoring. All included user-reported outcomes with high mentor/mentee satisfaction and 2(5%) reported assessments of mentee performance. Two(5%) studies mentioned the importance of mentor-mentee relationships, but none assessed the impact of longitudinal relationships between mentor and mentee. None of the studies mentioned the costs of implementating the telementoring program beyond the cost of the equipment.

Conclusion: The quality of the current evidence is limited, but telementoring is associated with a low risk of complications and high user satisfaction. There is a need, however, for large scale, comparative studies that provide evidence for the effectiveness of telementoring. There is also a need to evaluate platforms, cost, and the role of the mentor-mentee relationship. 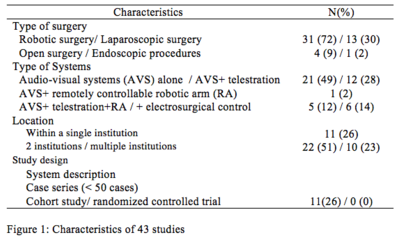