INTRODUCTION: Patients with locally advanced rectal cancer are treated with neoadjuvant chemoradiation and surgical resection. Advanced surgical techniques such as mesorectal excision have enabled sphincter sparing surgery to be accomplished for patients with distal cancers. Although these procedures are being done more frequently, they remain fraught with both immediate perioperative and long term complications. Fecal Incontinence (FI) is a significant long term postoperative complication which can result following such surgical intervention. While reports show improvement over a 1-2 year period, a significant number of patients continue to experience FI and the so called Low Anterior Syndrome (LAS). Sacral nerve neuromodulation has been traditionally used for treatment of urinary incontinence with the use of Sacral Nerve Stimulator (SNS) implantation and is now being utilized to treat FI. We report the initial successful use of SNS to treat fecal incontinence secondary to radiation and postoperative changes following treatment for rectal cancer. A 70 year old Asian female was diagnosed with stage III rectal cancer and underwent neoadjuvant chemoradiation followed by low anterior resection with diverting ileostomy in 2011. Her ostomy was reversed in August 2012 and she developed fecal incontinence. Non-operative measures were taken in attempt to improve her incontinence without success including fiber supplementation and pelvic floor therapy.

METHODS: Prior to SNS implantation the patient was given a Cleveland Clinic Fecal Incontinence Score (CCFIS). Patients rate daily incontinence episodes on a 4 point scale in 5 categories including incontinence to solids, liquids, gas, frequency of protective undergarment pads and need to modify lifestyle. A score of 0 in each category is equivalent to never events and a score of 4 is equal to always with 20 being a maximum score. The patient then underwent placement of the SNS probes into the S3 foramen. This was followed by a 1 week test period in which the patient had the probes connected to an external modulator. Following the test phase she then was reassessed with the CCFIS.

RESULTS: The patients initial CCFIS was the maximum score of 20. Following insertion of the probe at 1 week the patient reported an improvement in her CCFIS to 11. She maintained incontinence to solids usually (score of 3), liquid never (0), gas always (4), use of pads always (4), lifestyle modification never (0).

CONCLUSION: Sacral Nerve Stimulator insertion is potentially an effective treatment for fecal incontinence for patients that have undergone neoadjuvant chemoradiation and resection for rectal cancer. Further study is warranted on larger sample sizes to ensure consistency of results and long term outcomes should be measured. 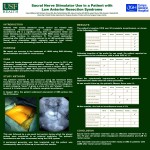