35-year-old lady admitted from emergency department with diagnosis of severe acute pancreatitis secondary to chronic alcohol abuse with raised amylase and lipase with Glasgow pancreatic scoring of 3. Despite initial resuscitation patient developed persistent colonic ileus, which unfortunately didn’t respond to conservative management. On the 2nd hospital day it was noted that she developed unilateral edema of her left lower limb with skin changes, which was initially attributed to venous thrombosis, which was eventually ruled out by a venous Doppler. She developed marked neutropenia with raised CRP and blood culture send was positive of gram negative septicemia. In view of increasing lower limb edema, colonic ileus and worsening inflammatory markers a CT done on the 4th hospital day was suggestive of acute pancreatitis with minimal necrosis and retroperitoneal inflammation and colonic dilatation likely causing external compression on the left lower limb major vessels. However the colonic ileus and lower limb edema persisted with increase in skin mottling changes and she continued to be neutropenic. An emergency flexible sigmoidoscopy was done for decompression of the dilated large bowel relieve the colonic ileus. Following emergency endoscopic decompression of the colon and resolution of the colonic ileus it was noted that the lower limb edema with skin changes had gradually resolved.

Colonic ileus not responding to conservative management can lead to translocation of bacteria, which can lead to gram negative septicemia. Retroperitoneal inflammation and colonic ileus had caused extramural compression on the lower limb vessels causing compartment like syndrome. A timely endoscopic decompression helped in treating the colonic ileus and preventing further translocation of gut bacteria and helped in reducing the compression on the lower limb vessels and leading to improvement in the patients clinical condition. 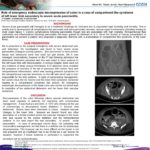