Background. Aim of this study is to evaluate feasibility, oncological safety and short-term outcomes of robotic total mesorectal excision (R-TME) for rectal cancer compared to laparoscopic TME (L-TME). Materials and Methods. From January 2008 to June 2009 50 patients with histological proven adenocarcinoma of middle and lower rectum were enrolled. Mean age was 64.6 years, 35 were male, mean body mass index was 23. R-TME was performed in 25 patients, 37 patients (74%) received an anterior resection and 13 (26%) an abdomino-perineal resection. In 23 patient (46%) a preoperative radio-chemotherapy treatment was performed. The Robotic system used was a four arms Da Vinci® Surgical System (Intuitive Surgical, Sunnyvale, CA, USA). Results. Mean operative time was 258.2 minute for R-TME and 245.8 for L-TME (p 0.2), first bowel movements were 2.5 days in both groups (p 0.5), mean hospital stay was 6.8 days in R-TME and 6.9 days in L-TME (p 0.4). Major complications with a reoperation occurred in 2 patients in the R-TME group (one anastomotic leakage and one small bowel perforation) and in 3 patient of the L-TME group (one colonic ischemia and 2 anastomotic leakages). The overall percentage of post-operative complications was 16% in the R-TME and 24% in the L-TME (p 0.5). The total number of lymphnodes retrieved were 19.7 in R-TME and 18.2 in L-TME (p 0.7) and in both groups proximal, distal and circumferential resection margins were free of disease. Conversions were considered in case of laparotomy and were 0 in R-TME and 1 (5%) in L-TME group. Conclusions. Robotic TME in rectal cancer is a safe and feasible operation. The oncological results and short-term outcomes are similar to the laparoscopic technique. Further studies are justified to evaluate which, between laparoscopic and robotic, is the better technique in the treatment of rectal cancer 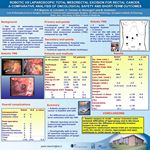