Robotic Versus Laparoscopic Surgery for Colonic Disease: A Meta-Analysis of Intra-Operative Variables.

BACKGROUND: The use of Robotic surgery has been proven to be a safe and effective alternative to laparoscopic techniques in the treatment of colorectal diseases, although drawbacks noted such as increase operative time (OT) and higher cost have been documented. This meta-analysis was done to compare laparoscopic colectomy (LC) versus robotic colectomy (RC) in terms operative time (OT), estimated blood loss (EBL) and conversion rate.

METHODS: We performed a MEDLINE database search with secondary referencing to identify studies suitable for inclusion. Selected studies included those in which LC and RC were compared in terms of post-operative outcomes. We calculated the I squared statistic as a measure of heterogeneity. We used fixed and random effects models to calculate the standardized mean difference (SMD) and Odds ratio (OR) of the outcomes between the LC and RC groups. 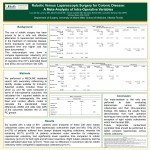